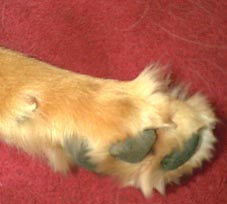 Before
A fuzzy, untrimmed front foot, about 3 weeks’ growth.

Step 1
The fuzz growing from between toes, (circled) should be pushed down through the dog’s toes with your finger. 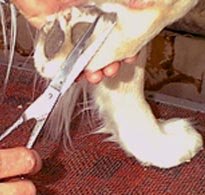 Step 2
The foot should be held backwards (whether using a grooming table or grooming on the floor) and the straight edge sheers are then laid flat (parallel) to the pads of the dogs foot and all of the unruly hair trimmed even with the bottom of the pads, including the fuzz you just pushed through from the top of the foot. 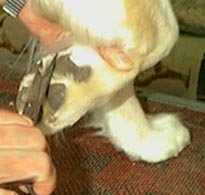 Step 3
Do NOT trim the hair from between the pads either from the top, or the bottom of the foot! If you make that mistake, you will have a splayed and flattened foot; ugly to look at and not in keeping with the Breed Standard, that says “tight and cat-like”, and certainly not ready for the show ring! 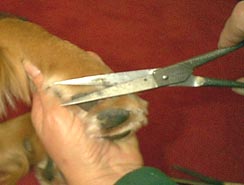 Step 4
Next, use the straight shears around the outside perimeter of each pad, working for the most part, with the foot held backwards and from underneath. The photo shows how you are skirting the edge of the pads on the outside of the foot.

Pull the fuzz from step 1 back to the top of the foot with your fingers so it is straight out. Then, with the thinning shears, make one thinning cut only in the fuzz. Then STOP. Brush the hair down with a bristle brush, or push down with your fingers. Look at your progress with the dog standing on the grooming table. You may also pluck a small amount of this fuzzy hair out with your fingers, but remember don’t remove a lot! We will come back for finishing! 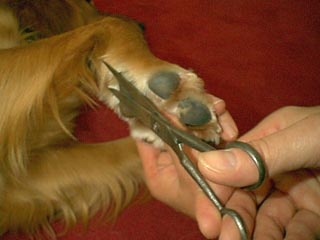 Step 5
The photo shows the angle of the straight shears held perpendicular to (and actually laying on) the large pad on the front foot. Hold the toes with your thumb and forefingers, to enable laying the shears on the large pad. The pasterns are usually only trimmed up from the pad about 3/4″ to 1″ max for show purposes, so as not to give the dog a weakened look to his pastern. You do not do this trimming closely, either with scissors or with an electric clipper, this is why you are trimming even with the level of the large pad. In my opinion, an electric clipper has no place in the Golden Retriever's grooming tool box. 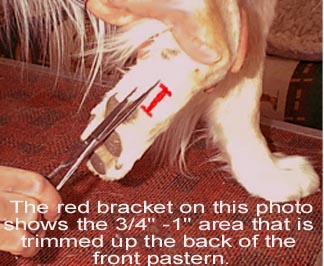 Step 5 (cont.)
Here again, with straight shears: showing the trimming of the front pastern. I prefer using the 3/4″ trim only, and of course you are trimming across the width of the foot while doing this. 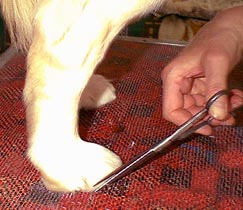 Step 6
The perpendicular final trim on the fuzz over the toenails of both the front & back feet. You may use either the straight blade shear, or the thinning shears for this, but I suggest the thinning shears until you are well practiced. Do not lay the shears in toward the foot when doing this, keep them coming straight up from the table. This must be done with the dog standing. The thinning shears may be used with rapid-consecutive cuts (held perpendicular to table) as shown above, around the general shape of the toes (outside edge of front & rear feet). 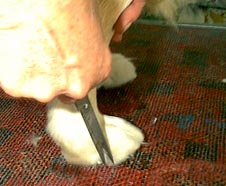 Step 7
This is the final trim around the feet, front & back, with the dog standing on the table. The tip and bottom blade of your straight shears should be resting on the table. When trimming around the nails, depending on the type of foot the dog has, I may decide to trim more away from the toenails, to shorten the appearance of the toes, but in most cases, you do not want to expose the toenails, and should not need to, especially on the back feet. Just slide the shear along the nail to trim as shown. 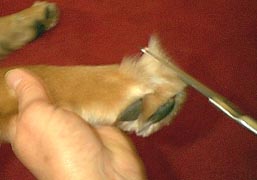 Step 8
If at this final look at the foot, you are still not satisfied because there is “fuzz” on top of the toes, pull the fuzzy hairs out away from the foot once again, and at the outside edge of the fuzz, angle your thinning shears so they will make the cut closer (or shorter) near the toenail, and longer near the top of the toe as shown in this photo. Thin one stroke or cut at a time, brush the foot and look, with the dog standing on it; this should take no more than 1 very light thinning cut, possibly two. 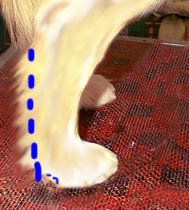 Step 9
Trimming the hock is simple. Brush the hair out from the foot and hock. Using your straight edge shears, make a vertical cut, perpendicular to the table the total length of the hock, leaving the hair length at least 3/4″ to 1″ long at the back of the hock as an end result. If the dog has an excess of hair, you may thin it a little with thinning shears.
The dotted blue lines in the photo give you an idea of where to trim, then brush down, and neaten up at the back of the pad. You are neatening up the “line”, but you do not want to trim too short. Note: the actual hock is a good distance away from my dotted line! 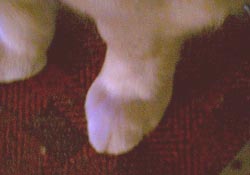 After
The Finished Foot!