Tools: Thinning shears Preparation: Brush the tail thoroughly, making sure all traces of tangles or matts are removed. Don’t let this task daunt you, it isn’t that hard, just do a little at a time, over a period of several days, until you have the effect you desire. The Breed Standard reads that the tail should just reach the dogs hocks, and though some dogs will have a slightly longer tail, your goal is to trim the tail to that length as closely as possible, and still not have the tail look noticeably sculptured. The Goldens’ tail has a rounder, fuller look when groomed, and the triangular wedge seen on an Irish Setter with a “break” at the base of the tail, is NOT the look desired. The area at the base of the tail is customarily not groomed to separate the tail from the feathering on the butt, as is done with the Setters in particular for the show ring, although on a heavily feathered dog, some shortening of the length can be done to keep the dog cleaner. 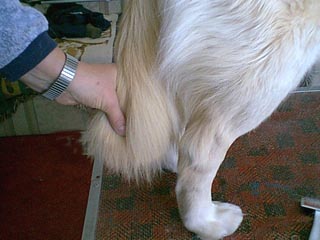 Step 1
Hold the tail down to the hock and place your thumb at the point where the end of the tail meets the hock to mark the length you will trim. Note: An imaginary line drawn from the thumb will just meet the top of the dog's hock. This will be the final length of the tail. 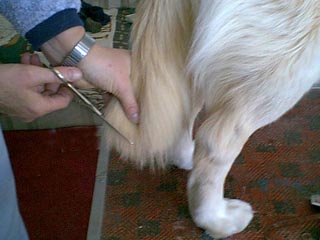 Step 2
Using the thinning shears, start trimming just past that point, giving yourself some leeway, especially if you are a beginner. 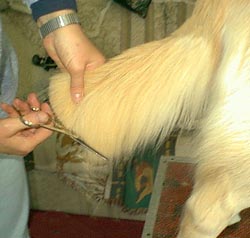 Step 3
On the majority of dogs, especially if never having had their tails trimmed before, will sometimes have a ragged edge with quite lengthy feathering. It is often much longer at the tip and very long at the point, that my thinning shear is just beginning to come to in this photo. Make the initial cut of length this way, then come back, moving side to side across the tail breadth, making light and fleeting cuts to blend up the sides of the tail, so blunt cuts are not glaring. More extreme length of the feathering at the tail's base should be trimmed a little also. This particular dog does not have an abundance of tail feathering or coat.
Lift the tail and begin thinning, rounding the length of the tail, feathering slightly toward the base. This dog had his tail trimmed not many weeks prior to the photo, so you need to look closely to see that I am trimming about 1″ of feathering off. 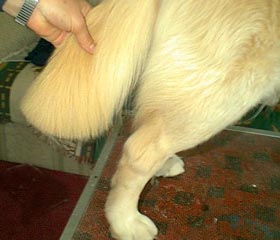 Step 4
The finished tail. I also do some rounding and blending very carefully at the very tip of the tail, so that when the tail is hanging naturally down, it doesn’t look like someone cut it straight off with a blunt knife.